What is Science Olympiad? 2019

America's Most Exciting Team Science Competition
For the past 28 years, Science Olympiad has led a revolution in science education. What began as a grassroots assembly of science teachers is now one of the premiere science competitions in the nation, providing rigorous, standards-based challenges to nearly 6,000 teams in 49 states. Science Olympiad's ever-changing lineup of events in all STEM disciplines provides a variety of career choices and exposure to practicing scientists and mentors. Recognized as a model program by the National Governors Association Center for Best Practices, Science Olympiad is committed to increasing global competitiveness for the next generation of scientists. 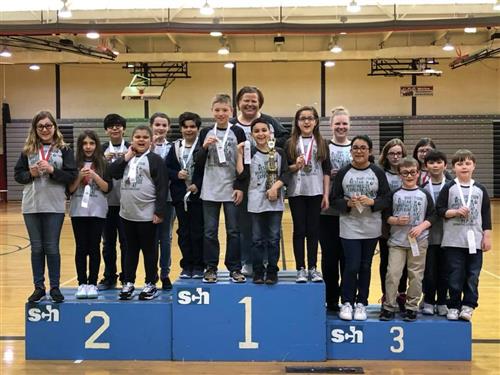 The School City of Whiting Science Olympiad Program now comes in many shapes and sizes to fit all our needs. At the K-5 level we offer an Elementary Science Olympiad (ESO) program which comes in the form of a competitive tournament. In grades 6-12, Science Olympiad functions much like a football or soccer team, requiring preparation, commitment, coaching and practice throughout the year.

Science Olympiad competitions are like academic track meets, consisting of a series of 23 team events in each division (Division B is middle school; Division C is high school). Each year, a portion of the events are rotated to reflect the ever-changing nature of genetics, earth science, chemistry, anatomy, physics, geology, mechanical engineering and technology. By combining events from all disciplines, Science Olympiad encourages a wide cross-section of students to get involved. Emphasis is placed on active, hands-on group participation. Through Science Olympiad, students, teachers, parents, principals and community leaders bond together and work toward a shared goal. Teamwork is a required skill in most scientific careers today, and Science Olympiad encourages group learning by designing events that forge alliances.

This year, Ms. Nee and Ms. Pearson coached our students.